IOTA price has fluctuated heavily in the past 24 hours, recording values within the range of $0.97 to $1.13 as shown on crypto market data aggregator CoinGecko. The 48th ranked cryptocurrency is trading around $1.02 at time of writing, with a daily trading volume of over $90 million and market cap of $2.8 billion.

According to CoinGecko data, IOTA’s price is down 6.8% against the US dollar and 5.4% against BTC in the 24-hour timeline. Although bulls are battling to keep prices above $1 after today’s dip, the robust challenge they face at current prices suggests a fresh decline extending to 4 August lows of $0.82 is possible.

Here is how MIOTA/USD looks on the daily and 4-hour chart:

On the 4-hour chart, MIOTA/USD is below the 50MA, but looks likely to attempt a new move after rebounding from an old horizontal support line. The contrary picture is nonetheless more likely given the RSI is languishing below 50 and a bearish crossover for the MACD suggests seller advantage. 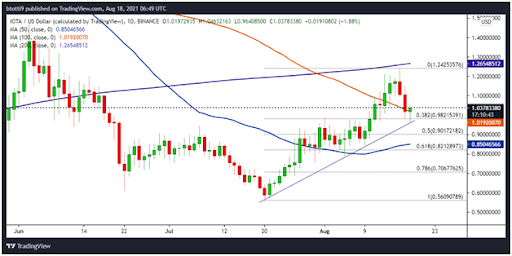 The negative returns from the 200MA included a two-day plunge past the 100MA, with bulls’ attempts to keep shape thwarted by increased profit taking across the market. The outlook suggests that renewed downward pressure might finally push IOTA/USD beneath the support trendline. The scenario points to a potential retest of the 50% Fibonacci retracement level of the swing to $1.24, which would mean losses to $0.90.